Ghosts of our grandfathers

Five week on the muddy set of the war movie Passchendaele brought Vancouver man a step closer to his soldier grandfather he had never known.

VANCOUVER – Tim Heller never met his great grandfather, but working on the Canadian war epic Passchendaele has allowed him to walk a few miles in the shoes of Sgt. Marshall Standbridge.

Standbridge fought with the 72nd Seaforth Highlanders in the final push of a three-month battle that liberated Ypres from the Imperial German Army.

The Canadians battled through mud so heavy that many soldiers drowned before they could fire a round. The Germans actually ceded the marshland to the Canadians knowing they would have to wade through it to engage in battle, leaving them vulnerable to slaughter. 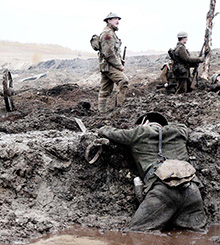 Tim Heller in costume for the filming of Passchendaele.

Much of the fighting was up close and personal in the final days, using bayonets and grenades.

By the time the Germans were finally pushed out of Passchendaele 140,000 Allied lives had been lost.

“We wore thin wetsuits under our uniforms and every morning they would spray us with a fire hose and we would literally roll around in the mud, then the costume girl would come and throw more mud on us and paint more mud on our hands and faces,” Heller said.

Rain towers showered the muddy field with water through the entire five-week shoot.

About 100 men helped with the battle re-enactments.

Heller won his part on the strength of his work as a re-enactor for the CBC five hour production, The Great War.

Heller inherited his grandfather’s Seaforth Highlanders hat and medals. There is also a family ring that Standbridge made after the battle for Vimy Ridge while still in the field.

“It’s a piece of trench art,” Heller said of the ring.

Rings made by First World War soldiers are usually inscribed with the location of a battle and the year. Standbridge engraved the year 1917 on his.

Heller had old newspaper clippings from Standbridge’s military career that mention his service with the famed  43rd  Nepalese Gurkhas as a captain in the British Army serving in India and Afghanistan before he came to Canada.

“Standbridge explored Canada at the turn of the [20th] century,” Heller said. “He spent a couple of years moving across the country spending time in Manitoba.”

Being of British descent, he ended up in New Westminster, one of the British cities

at the end of the rail line. He brought up two children Evelyn Cymbeline and Thomas Marshall at 1209 Hamilton Street New Westminster B.C.

Through war records, funeral records and painstaking research, Heller began to build a picture of the man behind the trinkets. He found Standbridge’s grave at Sapperton.

Heller found a picture of Standbridge in the Seaforth Armory on Burrard Street in Vancouver. Other pictures were handed down from family.

“He has a slight grin on his face in one of the photos and he looked like a real nice chap,” Heller recalled. “Everyone I talked to in the family said he was a real class guy, a real gentleman with a good sense of humor.” When he enlisted he was in his forty’s and joined the Highlanders five days after they received orders to take men for the war effort.

Standbridge went over seas as a private, by the end of the war he was a sergeant major.

of throat cancer. The story passed down in the family is that this was a result of the poison gas of WWI.

When CBC started recruiting relatives of Canadian soldiers who fought at Vimy Ridge to participate in making the docudrama The Great War, Heller jumped at the opportunity.

Heller was among 150 people selected from 6,500 applicants. Their prize: realistic training in a boot camp in Quebec, living in a camp and the trenches 24 hours a day

marching in formation, going through the same training as their soldier ancestors had.

The training made it feel pretty real,” said Heller. “They had the enemy firing at us in the middle of the night.” “We slept on the ground with a little straw under us and one wool blanket.”

While marching in Quebec’s 40c-degree weather was uncomfortable in a wool uniform, Heller had the advantage of wearing a Highlander kilt for natural air-conditioning.

The peak of the descendant soldiers’ experience was participating in the 90th anniversary of the “Vimy Ridge” battle in France last year.

“One of the proudest days of my life was marching in that uniform in the city of Arras, just outside of Vimy,” Heller said.

Though shooting for Passchendaele was longer at five weeks than his Quebec boot camp experience, it was a little less rigorous.

“I helped with the back ground teaching some to march and choreographing hand to hand combat in the mud, but at the end of the day you could shower and sleep in a bed,” Heller recalled.

Between the Vimy re-enactment and the shooting of Passchendaele, Heller has walked a while in his grandfather’s shoes.

His story contains some striking parallels with that of the film’s star Paul Gross, who also wrote and directed Passchendaele.

The Canadian actor has been haunted for years by the pain his own grandfather carried with him through his life after the final battle for Ypres.

As early as 1998, Gross spoke of watching his grandfather die, deliriously reliving the battle and his bayonet attack on a young German soldier, whom he stabbed in the head.

Gross never forgot that experience and wrote the screenplay for Passchendaele as a way to finally exorcise that spirit from his own mind.

While Gross pays tribute to his own grandfather playing the lead in the film, Heller honors his grandfather in the muck and the mire.

Tim Heller said: “I’ve been trying to live as much of his experience as possible. The crazy thing is I have been the same age as him through these experiences. When I sighed up for the CBC’S The Great War Project in Sept. 2005, my grandfather sighed up Sept. 11 1915, for the Great War. I trained in Quebec in 2006 while he was in Quebec in 1916 for training.

Exactly 90 years later on the anniversary of Vimy Ridge I marched the same streets as he would have in the “Freedom of the city” parade in France, in the same Highlander uniform, wearing his Vimy ring. The crowd was amazing and cheering us all the way. People of all ages lined the street thick for over two miles. I would yell Viva le France and the crowd would yell it back. The French people remember. It put a lump in my throat. That was a proud day for Canada, and I marched past the Queen and I still can’t believe it!

I was also the same age as he was when he was at the battle for Passchendaele, as we were filming the Passchendaele film outside of Calgary exactly 90 years later.

His battalion Seaforth Highlanders of Vancouver took “Crest Farm” on top of the ridge at Passchendaele during the fall of 1917. They were part of the 12 brigade, 4th division of the Canadian Expeditionary force.

I felt, I pulled off a hat trick of experiences which has been life changing and although it almost felt real it can’t be as real as the hell the men went through in the strange trench warfare of World War One.”